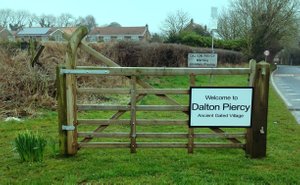 The village has a long history, once part of the manor of Hart, it was an ancient 'gated' village. Originally named Dalton 'the enclosed homestead in the valley' the village was walled, with gates at eastern and western ends. Vestiges of the old walls may still be seen at various places around the village and the gates, at the side of both the roads into the village, commemorate the old custom of closing the gates at dusk to prevent cattle, pastured on the green, from straying.

The manor of Hart was granted to Robert de Brus by William the Conqueror. It was later transferred to the Balliol family and the 'Piercy' was added in the 13th century when the daughter of Ingram de Balliol married William de Percy, the village being part of her dowry.

There are four Grade 2 listed buildings in the village. College and Manor Farmhouses, itRose Cottage and The Priory.  The Borough Council of Hartlepool has also included Leamount as a locally listed building. The village has no church, however in front of Rose Cottage are the buried ruins of a 19th century chapel.

On the left, when entering the village from the east, is The Terrace, a row of early 19th century cottages, with a Victorian villa at the eastern end. Situated further to the south of the green is an ex-army hut, bought in the 1950s to serve as a village hall, still in use today though in need of replacement.

At the heart of the village lies the green, registered under the Commons Registration Act 1965, and since extended to include the area at the side of Rose Cottage in the 1990s. On this green villagers would once have pastured cattle, poultry and probably even pigs, as it was common land for the use of all. The green is owned by the Parish Council on behalf of residents; unusually, Dalton Piercy's green registration includes the tracks across it, used by residents to access their homes and agricultural buildings or land. The Parish Council has a responsibility, in law, to maintain the green and to protect it from infringement; this includes ensuring that the surface of the tracks is in keeping with their historical heritage.

In the 1940s, a tea shop and a sweet shop at the end of the green provided refreshments - the village was a popular picnic spot for families who would walk over public rights of way, across the fields, from Hartlepool town. These public footpaths are still popular today, but there has been no shop in the village since the last one was destroyed by fire in the early 1980s.

Dalton Piercy appears to have never had a public house, although it is believed that Priory Farm was once a brewery! The old Red Lion pub, now replaced by the Windmill Hotel, is a mile to the west of the village, on the side of the A19 road.

In the past, the village had three sources of water - Char Beck to the east, a well spring near Rose Cottage and, to the west, a pump on the green, now removed. At the eatern end of the green, the beck flows into a long stretch of land known as The Batts, a twelve-acre waterside meadowland, owned by the parish, which forms part of a wildlife corridor linking the Tees estuary to another local reserve, The Howls. The Batts name probably originated from the Old English word, Bats, 'an area of low lying land which may flood'. On the west bank of the stream glacial deposits may be seen, a legacy of the Ice Age!

Agricultural land and wildlife areas with sites of Special Scientific Interest (SSI), surround Dalton Piercy. Three main footpaths lead from the village to Elwick (to the north), to Brierton (to the south-east) and to Summerhill Countryside Park, (to the east) on the edge of Hartlepool town; residents, dog walkers, ramblers and tourists frequently use these. Fishing lakes lie just outside the village ribbon, Abbey Hill half-a-mile away north-eastwards, next to a holiday caravan park, and Lakeview, one mile away to the south. There is an abundance of liveries and riding schools on the village outskirts and in the surrounding area, so it is no surprise that horse riders are frequently seen in the village.

In 2020 a bus service was introduced, part funded by the Tees Valley Mayor.  Tees Flex is an 'on demand' service.  For further details click HERE

Below is a map of a self-guided walk from Dalton Piercy, produced by Hartlepool Borough Council as part of a series of  walks around the Borough. (The series is downloadable here. 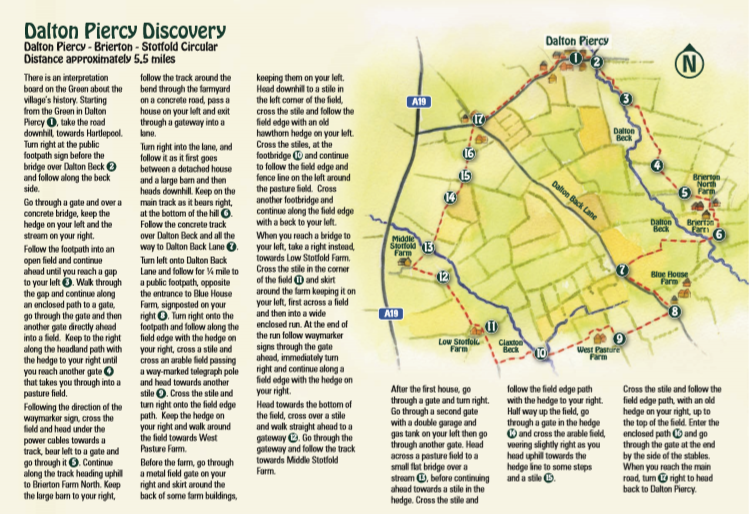